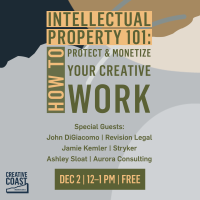 Intellectual Property 101: How to Protect & Monetize Your Creative Work

ABOUT THIS WEBINAR:
The Traverse City region is home to many creative enterprises that span a range of disciplines---from technology, visual and performing arts, to media and architecture. A common theme is that the output of creative talent is considered “intellectual property” (IP) and can be protected and monetized. From patents covering GoSili products, to trademarks of merchandise at M-22, the legal rights of patents, trademarks, copyrights, and even trade secrets are critical to the success of many organizations. Extracting value from these legal rights can also be realized through the process of licensing. Join three Traverse City-based experts in discussing these IP topics to learn the basics of IP protection and monetization.

ABOUT THE GUEST SPEAKERS:

John has extensive experience in internet law, intellectual property, corporate law, and international law. He has litigated matters in these areas in state and federal courts across the United States, including in front of courts of appeals and international arbitration bodies, such as the World Intellectual Property Organization, National Arbitration Forum, and the South African Institute of Intellectual Property Law. He is also an adjunct professor of both trademark and Internet law for Michigan State University College of Law, teaching both in East Lansing, Michigan and in MSU’s summer abroad program in Opatija, Croatia.

John is highly sought after for his deep understanding of the intersection of law and technology. He has been published and interviewed concerning internet law, intellectual property law, and emerging legal issues by various media outlets, including the Economist, Intellectual Property Magazine, Canadian Public Radio, and other media outlets across the country and world. He is regularly asked to speak to conferences and corporations on his areas of expertise. In 2014, John was recognized as one of the most influential people under the age of 40 in his home of Traverse City, Michigan. From 2015 to the present, John has been recognized as a “Rising Star” by SuperLawyers and, in 2020, he was recognized by Best Lawyers as a Best Lawyer in the Midwest in the field of intellectual property.

Jamie Kemler is currently the VP, Intellectual Property Business Strategy for Stryker Corporation with responsibility for the development and execution of Stryker’s enterprise-wide IP business strategy to include monetization activities and relationships with technology transfer and licensing/venture offices of global universities and hospitals. He spent 2019 on temporary assignment in Hong Kong leading business development across Stryker’s Asia Pacific region. Earlier in his career at Stryker Jamie was Group President for the Biotech, Spine, Trauma, and Development divisions, with multiple manufacturing and research operations in Europe and the U.S.

Jamie Kemler received a B.S.E. in Biomedical Engineering from Duke University in 1979 and an M.B.A. from Harvard Business School in 1983.  In 2012 he became a USPTO registered Patent Agent. He is also a Certified Licensing Professional and a Registered Technology Transfer Professional. From 2017 through 2020 he was named to the IAM Strategy 300 – The World’s Leading IP Strategists.

Ashley is a USPTO-registered patent practitioner who specializes in the development and management of patent portfolios for startup ventures and emerging growth companies. She takes a hands-on approach with each client, partnering with Engineering and Management teams to intimately understand each client’s business, competition, and product vision. Armed with this knowledge, Ashley is able to increase the value of her clients’ patent portfolios while reducing overall legal costs.

Ashley’s company, Aurora Consulting LLC, purchased Hudak Consulting Group LLC at the end of 2016 and has maintained a similar subject matter focus. Since then, Ashley has rapidly grown the company and maintained focus on startup ventures. Aurora Consulting currently serves clients, ranging in size and technological field, throughout the U.S. and internationally.

Ashley earned her Ph.D. (summa cum laude) in the biomedical sciences from the University of Michigan. In addition to her research in immune-mediated disorders, Ashley also worked as a technology transfer fellow in the Office of Technology Transfer at the U of M. There she analyzed nascent technology for commercialization potential (marketability, challenges, competitors, potential licensees) and patentability. During this time, Ashley authored or contributed to nine peer-reviewed publications, presented at over 25 research conferences and meetings, acquired over $25,000 in research funding, and served as an Associate Editor for Faculty of 1000, where she reviewed and highlighted cutting edge research in the biomedical research space.

After earning her Ph.D., Ashley served as a patent infringement researcher for the U of M and a regulatory writer for an Ann Arbor-based, early stage pharmaceutical company, in particular, drafting documents for approval by the European Medicines Agency.


THANK YOU TO OUR SPONSOR: 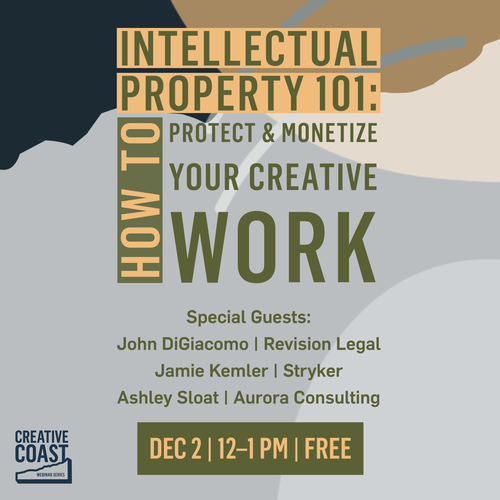 Please register for this event in advance. Upon registering, you will receive a confirmation email with a Zoom webinar link included. If you do not see the email in your inbox, please check your spam.

This event is free to attend!