Virtual - Confirmation email will contain a zoom link to join

* This event is only available to current Traverse Connect Investors 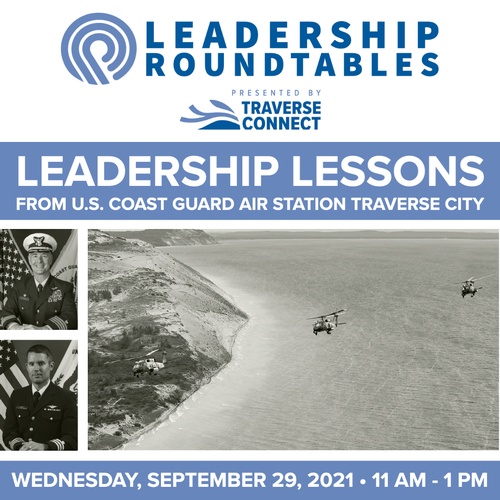 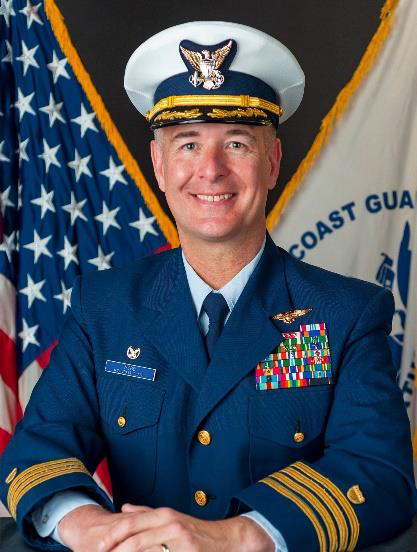 CAPT Charles ?Chuck? Webb assumed command as the 42nd commanding officer of Air Station Traverse City in July 2019. As one of the oldest air units in the Coast Guard, Air Station Traverse City has proudly served the nation and the citizens of the Great Lakes since 1945. The unit consists of 120 personnel, 40 Coast Guard Auxiliary members, and over 220 dependents. The air station operates a fleet of three MH-60T Jayhawk helicopters to execute missions throughout the Great Lakes and cover a coastline of over 10,000 miles.

CAPT Webb hails from Muskegon, MI and transferred here from Air Station Atlantic City, NJ where he served as both the Executive Officer and Operations Officer. He was second-in-command in the oversight of 11 MH-65D helicopters and two distinct mission sets: Search and Rescue and Rotary Wing Air Intercept (RWAI). He was tasked with providing two Search and Rescue aircraft for operations along the Eastern Seaboard; two RWAI alert aircraft at the National Capital Region Air Defense Facility in Washington D.C.; and one, on-demand, RWAI alert aircraft for air defense of the President of the United States anywhere across the nation. He led a staff of 270 personnel and engaged with numerous mission partners such as the U.S. Secret Service, Department of Defense, U.S. Capitol Police, and the North American Aerospace Defense Command (NORAD).

He began his military career in 1992 at the U.S. Army Aviation Center in Fort Rucker, AL after completing undergraduate studies at Muskegon Community College and the University of Michigan. Upon graduating U.S. Army flight school, he was assigned to the 101st Airborne Division (Air Assault) at Fort Campbell, KY. His next assignment was the Commanding General?s pilot, 2nd Infantry Division, Camp Stanley, Korea. He then returned to Fort Campbell as an Instructor Pilot until his much desired selection into the U. S. Coast Guard in 1999.

His Coast Guard service began at Air Station Traverse City, MI. He was then assigned to Aviation Training Center Mobile, AL in 2003 and served in the H65 Standardization Division and the Aviation Special Missions Division where he was instrumental in the creation of the RWAI mission. His follow-on assignments were at the HC-130J Aircraft Project Office, Air Station Elizabeth City, NC, and the HC-130J Standardization Division. In 2012, he was assigned as the Executive Assistant to the NORAD and U.S. Northern Command Chief of Staff, Peterson Air Force Base, CO until his transfer to Atlantic City in 2015.

Having served in a variety of theaters with numerous deployments, CAPT Webb?s awards, badges, and decorations are consistent with those of service members who have had the honor to serve the United States for over 29 years. He is blissfully married to Lisa, another Michigander from Grand Rapids, and they have two adult sons, Daniel and Austin.

Commander Christopher L. Wright hails from Ocean City, NJ and transferred here from Sector San Diego, CA where he served as the Response Chief and Air Operations Officer. In this capacity, he oversaw all Coast Guard aviation and surface assets involved in search and rescue, law enforcement, and environmental protection operations for the greater San Diego area as well as the inland navigable waters of Arizona, Utah and Nevada.

Prior to his tour in San Diego, Commander Wright was an Aviation Safety Program Manager within the Safety Program Management Division at Coast Guard Headquarters (CG-1131), where he provided safety oversight and advocacy for all aviation assets, systems, and missions while also serving as the aviation-specific service center manager for fleet commands and flight safety officers. During his last year in this assignment, Commander Wright served as the Safety Program Management Division Chief where he managed the post mishap analysis process for all major Coast Guard accidents and oversaw Coast Guard-wide safety policy, risk management, assurance, and promotional activities.

As a Coast Guard Helicopter Flight Examiner, Instructor Pilot, and Aircraft Commander, Commander Wright has accumulated over 3,200 flight hours in the MH-60 flying homeland security, law enforcement, fisheries, and search and rescue operations on both the East and West coasts. Operational assignments include Air Station Cape Cod, MA where he served as the senior Flight Safety Officer, and Air Station Clearwater, FL where he supported migrant interdiction and counter drug operations throughout the Caribbean. His initial assignment was as a Deck Watch Officer aboard the USCGC KUKUI, homeported in Honolulu, HI.

Commander Wright is a 2001 graduate of the U.S. Coast Guard Academy where he earned a Bachelor in Marine and Environmental Science and is a graduate of the U.S. Naval Flight Training School in Pensacola, Florida where he earned his naval aviator ?wings of gold? in 2005. He also holds a Master in Aeronautics from Embry-Riddle Aeronautical University and a Master of Science in Quality Systems Management from the National Graduate School. Commander Wright holds Federal Aviation Administration Airline Transport Pilot and Commercial Pilot licenses and has obtained qualifications in Advanced Search and Rescue, Airborne Use of Force, Basic Fast Rope, and Shipboard Deck Landing operations.

Commander Wright is married to the former Jamie Cronenberger from Los Gatos, CA. They are the proud parents of one daughter, Skye, and are eagerly awaiting the birth of their baby boy in early August.