Kelly and Dykstra have 22 ski areas on their list. The previous record of 17 was set in Japan in 2017.

“We’ve had this goal in mind since 2019,” Kelly, 28, said. “Since then, Brad and I have been figuring out the details of which Michigan resorts fit the Guinness World Record guidelines and what would be the best route. Brad and I have both been to Crystal Mountain many times, and it is definitely one of our favorite resorts in Michigan.”

The pair will start their mission at noon Saturday with their first stop being Nubs Nob in Harbor Springs, Mich. Kelly and Dykstra will ski and ride 14 slopes on Saturday, sleep for a few hours, and begin the second leg of their journey at Mount Holly in Holly, Mich., on Sunday at 4:15 a.m.

The goal is to hit 22 ski resorts in all by noon Sunday, with their final stop at Cannonsburg Ski Area in Belmont, Mich.

“Michigan is the perfect place to attempt this record,” Kelly said. “According to the Michigan Snowsports Industries Association, no matter where you are in the state, you are within a two-hour drive of a ski area.” Michigan has 40 ski resorts across the state, second only to New York.

When asked why they wanted to try and break this record, the answer was simple: “Why not?” asked Dykstra, 29, of Hopkins, Mich. “It would be a fun personal achievement, the notoriety is cool to be in the GWR (Guinness World Records) and it’s something we can look back on and show our kids one day.”

Kelly, who’s from Caledonia, Mich., said if they didn’t get the record because of something within their control, such as incorrect planning, they would love to try again. However, he adds Guinness World Records is “very, very particular,” so if some of the evidence isn’t accepted for some reason they may second guess a second attempt.

The duo is required to a number of pieces of evidence to be considered for the record-breaking title: a timestamped lift pass from each place, photos and videos of the attempt, multiple non-affiliated witness signatures, and a log book of their trip – among other things.
“We’re 100% confident we can crush the record,” said Kelly. “We could have increase the record to 24 or 25, but a couple of the ski areas weren’t able to make it happen. We are truly thankful to all of the ski areas for going out of their way to accommodate us.”

If everything goes as planned, Kelly and Dykstra will arrive at Crystal Mountain (stop #12) around 8:20 p.m. Saturday, where they will be greeted by two ski patrollers, ride the Loki Quad, rip down a quick black diamond run, and continue on their way about 10 minutes later. 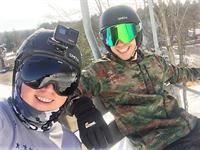