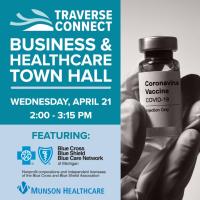 This event will take place via Zoom. You will receive the Zoom link in your registration confirmation email.

This event is free to attend. 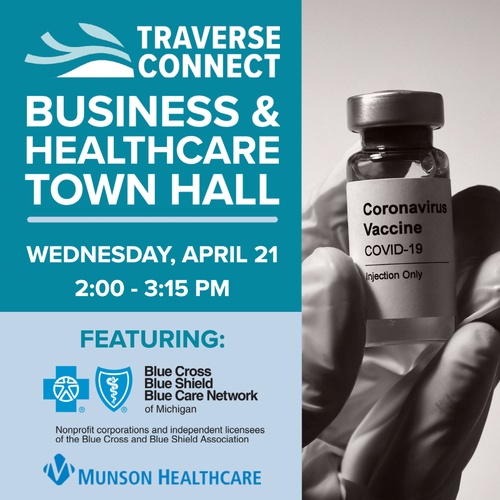 Join Traverse Connect, in partnership with Blue Cross Blue Shield of Michigan and Munson Healthcare, for a discussion about COVID-19; presenting a “status update” and sharing key information and developments while highlighting what the next several months may look like.

Dr. Grant has held numerous positions in organized medicine. He served as the president of the American Society of Anesthesiologists. Prior to his elevation to the presidency, he served as first vice- president, and treasurer and had been on the ASA Administrative Council from 2006-2019. Additionally, he chaired both ASA’s Section on Fiscal Affairs and the Committee on Executive Compensation. Dr. Grant has been on the ASA Board of Directors since 1999. He also serves on the Board of Directors of The Anesthesia Foundation and the Foundation for Anesthesia Education and Research.

Dr. Grant currently services as the chair of the delegation and section council on anesthesiology to the American Medical Association.

Dr. Grant and his wife, Lisa, a physical medicine and rehabilitation physician, reside in Bloomfield Hills and have two children, Brendan and Alexandra.


Christine A. Nefcy, MD, serves as Chief Medical Officer for Munson Healthcare, providing strategic direction for clinical initiatives and strengthening clinical practices across the system. She also oversees system quality and collaborates with the executive directors of the service lines.

Prior to joining Munson Healthcare, Dr. Nefcy worked as a Chief Medical Officer (CMO) at Intermountain Healthcare, a 22‐hospital, non‐profit system based in Salt Lake City, Utah. Dr. Nefcy was the CMO for four of the hospitals, representing the northern region of the system.

Dr. Nefcy is a Fellow of the Academy of GE Fellows and the Intermountain Healthcare executive development program. She retired as a Lieutenant Colonel from the U.S. Air Force Reserve in 2018.